The real Jack the Ripper? 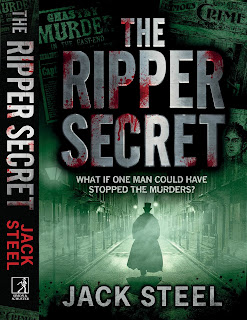 Yesterday Simon & Schuster published my latest book – The Ripper Secret – and the initial marketing push looks as if it’s been quite successful, with the novel being available in all the major supermarket chains and the high street retailers. As well as the usual kinds of promotions, the publishing house is also broadcasting a podcast I recorded on its website and featuring a short article I wrote about Victorian detection methods in the ‘Dark Pages’ section.
It looks as if the timing has been quite providential as well, with the second of a two-part BBC documentary being broadcast last night, the same day as the book’s publication, and with the level of interest in this most notorious of all serial killers still being remarkably high. When I input the search term ‘Jack the Ripper’ into Amazon, it came up with just under 3,400 items, an astonishing number of books and films bearing in mind that his killing spree took place almost a century and a half ago. Doing the same thing on Google produced almost ten million hits.
The BBC documentary was interesting, though the conclusions it came to were somewhat predictable and – like a lot of the things the BBC produces – very selective. Their principal suspects were Montague John Druitt and a Polish Jew named Aaron Kosminski, though no believable evidence was advanced to indicate that either man could have been Jack the Ripper. And it’s worth pointing out that in all over 200 different suspects have been suggested over the years, and some 30 of these have been seriously considered, ranging from the sublime (Prince Albert Victor with or without the assistance of Queen Victoria’s Physician-In-Ordinary Sir William Gull) to the ridiculous (‘Jill the Ripper’ or the ‘mad midwife’).
The documentary also provided reconstructions of some of the events, and these were not always as accurate as they certainly should have been. For example, when Israel Schwartz witnessed an altercation between a man and a woman who might have been Elizabeth Stride, he also described another man on the opposite side of the street, a man who then began following him. In the BBC’s version, this man didn’t appear at all, and the scene showed Schwartz passing very close by the arguing couple and getting an excellent look at the man involved, which certainly wasn’t the case according to his testimony.
They also were highly selective when considering the medical evidence. With a single exception, every doctor who examined any of the victims of the Ripper concluded that the killer had to have had at least some medical knowledge. The single exception was Dr Thomas Bond, who stated that he didn’t believe the murderer had any surgical ability, but conspicuously failed to explain how the Ripper had managed to remove Catherine Eddowes’s left kidney without damaging any of the surrounding organs in complete darkness in Mitre Square in under 15 minutes, a difficult and complex surgical procedure even on a corpse.
With regard to the killing of Annie Chapman, the divisional police surgeon Dr George Bagster Phillips stated that if he had performed the mutilations to her body, even in the well-lit and ordered surroundings of an operating theatre, the procedure would have taken him at least an hour. His views were echoed by the other doctors involved in examining the victims.
Probably unsurprisingly, the BBC ignored all the evidence recorded by every other doctor at the time, and simply took Bond’s statement as gospel, claiming that the killings showed no medical knowledge or ability whatsoever, presumably so that they could offer Druitt and Kosminski – neither of whom had medical training – as believable suspects.
Personally, I believe that it is undeniable the Jack the Ripper – whoever he was – at the very least had some medical and surgical training, and that of course would narrow the field of suspects very considerably and also, incidentally, eliminate at a stroke the most popular contenders.
The man who was Jack the Ripper in my novel, on the other hand, is a far better fit than most. Records from this period are notoriously patchy and incomplete, but there is evidence to suggest that this man was living in London at the time of the killings, had trained and then worked as a surgeon, and had a history of violence against women, with quite probably at least one murder behind him before he arrived in the city. He is also one of the least known of all the Ripper suspects.
The Ripper Secret is of course a novel, but the story is tightly woven around the killings which are described as accurately as possible after such a passage of time. I’ve taken considerable care to make sure that the facts are right, and in my opinion the story does work as a possible explanation for the murders. In particular, it provides logical answers to six questions which almost no non-fiction writer has ever managed resolved satisfactorily:

If you read the book, let me know what you think.