I know it's the done thing to be casual about these sort of things but last Friday it was announced that STOP ME has been shortlisted for the CWA John Creasey (New Blood) Dagger Award and frankly I'm chuffed to ribbons.

I absolutely love getting feedback from people who have been kind enough to read my book and receiving evidence that my work has resonated with people who care about the genre is also hugely exciting.

There's another seven talented writers who share the honour:

More info about these and other CWA nominations and winners HERE

I know Leigh, of course, but have only met one of the other writers shortlisted. I was on a panel with Diane Janes at Crimefest and she was kind enough to send me an email soon after the announcement. I'll say hi to the others here because I'm sure we're all checking out each other's websites, blogs and reading each other's books as well. Writers are good like that.

What I do know though is that each name represents an ordeal of hard work and perseverance to get their first book published and I wish all of them the very best of luck. It's a shame we can't all win but being shortlisted is an award in itself.

These sort of moments don't come along very often so it's always my policy to enjoy them while they last. I've reviewed the competition and I've got a fair idea of what my chances are against such quality but until the three nominations are announced on August 9th I'll be using it as an excuse for celebration.

This weekend I'm seeing a writer buddy of mine that I've known since school. His name's Tim Lebbon and as well as a great friend he's an award winning horror and dark fantasy writer. I'm horrified that it's been almost a year since I last saw him in the flesh. A few years ago he achieved his ambition of giving up his day job and writing full time. You can read all about his dark world HERE.

Tim's had some ups and downs like all writers but he works damn hard and has just secured some very exciting book and screen contracts. Neither of us have ever been shy of clinking a glass together so we'll certainly be enjoying the moment this weekend because we both know that the following morning the reality is always the same - back to the keyboard.

We wouldn't have it any other way.

Hey, congrats to my fellow Curzon-ites Leigh Russell and Richard Jay Parker. They have both made the shortlist for this year's Crime Writers' Association New Blood Award. Well done. And it is pretty cool that two of the eight writers shortlisted are Curzon members.
Posted by curzon group at 01:12 3 comments:

In the Telegraph today, I've been explaining why Dubai is thriller-central, a natural place for anyone writing about spies and mercenaries to set a story. And there is, of course, a scene there right at the start of 'Death Force'. You can read the piece here.
Posted by curzon group at 01:11 No comments:

It's a question that writers frequently ask themselves whether they be starting out, struggling to perpetuatre their ambition or writing professionally. Being a writer is one of the few professions that people find acceptable in terms of it earning little money. Put a silent 'struggling' before the title, nobody bats an eyelid.

Writers are frequently portrayed in the media as malcontented, downtrodden pariahs with an enormous capacity for alcohol (OK - that last one certainly attracts some people to the lifestyle). It's not a romantic image though. It's not true of many writers either.

But some truths are inescapable. There's never a guarantee of success in this business. Not every writer wants to earn the big bucks and is quite content with the therapy and pleasure it offers. However, anyone wishing to do it as a day job has to make it pay and the nature of the work (and the donkey/carrot technique that so many use to extract the work from us for nothing) means more often than not it doesn't.

Depending on which area of writing you're in personal projects can be taken out of your hands, changed, rewritten beyond recognition or stolen outright (although instances of this are not quite as common as some writers fear). There's also the interminable waiting period that comes before all that which every writer agrees is one of the most frustrating parts of the process.

So what is it that attracts so many people? I think it's because writing is still one of the purest ambitions to have. That creating something personal and championing it in the face of all the above is an innate human desire to share our individuality - whether it be with friends or the entire world. There's also that old saying about nothing that's worth having ever being easy so add our gluttony for punishment to the crucible as well.

It's not easy being a writer but I made a determined decision to be one quite some time ago. I inevitably get fed up with its myriad pitfalls but I can still find quite enough reasons - aside from the generous and supportive company of other writers - to want to continue.

Glass of wine anyone?
http://www.richardjayparker.com/
Posted by curzon group at 04:03 6 comments:

Apologies for the tardy blog. Am unable to write my planned blog at the moment. Hoped to deliver it Friday but will hopefully will be able to do this at the end of this week.

Instead I just thought I'd point you in the direction of two online articles. The first I found in The Bookseller and touches upon my recent blog about libraries and how they need our support. It's depressing reading and emphasises the need for this support before we lose something we take for granted. Read the article HERE

I noticed it also being tweeted by other writers today. To redress the balance so it's not all doom and gloom here's a link to an article about something more positive and another pet subject - Twitter itself. Interesting reading. Read the article HERE

Will catch you up on Friday.

Continuing the theme of library events... on 7th July Cyrus Moore, author of the brilliant

controversial thriller CITY OF THIEVES, and Leigh Russell, author of runaway success CUT SHORT and her new novel ROAD CLOSED, addressed a packed house at Gayton Library, the central library in Harrow. The two authors introduced themselves and their books, talked about their diverse journeys to publication, and read extracts from CITY OF THIEVES and ROAD CLOSED. They talked about crime fiction, and answered a host of fascinating questions from a lively and supportive audience. At the end of the evening, while everyone enjoyed the refreshments kindly supplied by the library, Cyrus and Leigh were delighted to sign their books for most of the audience. It was a great evening and the Curzon Group would like to thank the librarians at Gayton Library, and the local audience, for their 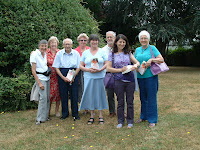 interest.
Here is a photo taken by a librarian at Kenton Library, with some members of the lively book group who came along to hear Leigh talking about ROAD CLOSED. Only about half of the group could stay behind for the photo, which shows what a thriving group this is. So if you haven't yet joined a book group at your local library - check it out!

There's another library panel coming up in August. Matt Lynn, Zoe Sharp and I will be travelling to Knaresborough on the 19th and talking writing and thrillers for an audience between 7.30 and 9 pm. Details HERE

I've done a few of these events now and as well as being great fun they've also served to remind me of what a vital role local libraries play for communities everywhere. I joined my small local library recently and rediscovered the joys of literary serendipity. There's a larger, plush library in town which has an impressive array of the latest releases but I also enjoy the more personal touch of local librarians and sampling titles I might not usually select (the inclusion of which they've had to consider carefully due to lack of space). A recent holiday was much richer because of it and I got turned on to two authors that I probably wouldn't have put top of my tbr list.

Libraries of all sizes offer so much more than people realise from access to local information, journals, Internet, talking books, DVDs, as well as the facility to request books you want to read.

Moreover, they're still a social centre and many of the ones I've been visiting have a very healthy itinerary of events. Let's hope the proposed government cuts don't bite too hard and try to support them. Long may they be open for business.

In direct competition with the shrill sound of Chichester Cathedral's peregrine falcons showing off to the observers assembled below three members of The Curzon Group (Matt Lynn, Tom Cain and Richard Jay Parker) converged on the local library and added their contribution to the summer festival.

After introductions and readings from action assassin thriller THE ACCIDENT MAN, twisty serial killer story STOP ME and exciting military page turner FIRE FORCE ,the intention was to dissect thriller writing amongst ourselves for half an hour before taking questions. However, the audience were keen to interact and we were pleased that so many of the questions asked led us to new areas of discussion.

We debated ebooks and if their introduction would see the way stories were written change. We agreed that the slider certainly presented more of a temptation to scan books. Matt expanded on this in relation to the way books are read by people with busy lives and how this is changing the speed of stories and structure of chapters. Tom cited a story about a recent appearance. Because it was a last minute booking he had to turn up without any books. However, somebody in the audience downloaded his book while he was talking. It was just a shame he couldn't sign it.

We ended up overrunning as we were asked questions about chapter cliffhangers, writing for international locations, story planning and the dangers of over researching.

Special thanks to Pam and Flic for making us so welcome. It was very tempting to stay in Chichester and scuttle into one of the inviting freehouses (I hadn't been to Chichester for some time and was keen to reacquaint myself) but unfortunately we all had to embark on our journeys home.

We look forward to visiting again.

Posted by curzon group at 06:35 No comments: