I'm losing the Jay from my name for Exhibit A.  My UK debut thriller, STOP ME, was published under Richard Jay Parker but there's another R J Parker in the US and Angry Robot want to avoid any confusion when my new book, SCARE ME, hits the shelves there as well as the UK.

So now I'm Richard Parker and this simplified name is not without history - aside from it being the character in 'Life Of Pi.'  In 1838 Edgar Allan Poe wrote a story entitled 'The Narration Of Arthur Gordon Pym ofNantucket.’  It concerned Richard Parker, a mutinous sailor who is cannibalized by survivors after his whaling ship, The Grampus, capsizes in a storm.

Real life was later inspired by untrue events.  In 1884 a yacht, The Mignonette, sank leaving four members of the crew drifting in a life boat. They cannibalized the cabin boy who had perished after drinking sea water. His name was Richard Parker.

This is why I fly everywhere.  Even Richard Parker, the tiger in Life Of Pi ends up adrift in a life boat...

My editor at Exhibit A, Emlyn Rees, has just sent me this link to a site which features work by a writer named Stuart Noss.  Read more about The Sad Tale Of Richard Parker here...

I just hope the only voyage I embark on for Exhibit A is a literary one. 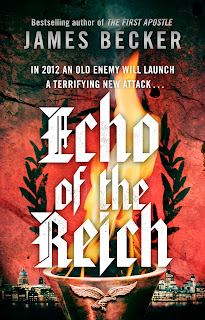 I’ve mentioned before that I live in the mountains, in the tiny principality of Andorra, which is a many ways a slightly strange country. This observation was brought home to me fairly forcibly the last time I took the dog out for a walk last week, before we headed north through France to England, where another cruise beckoned.
In a country where Alsatians and Huskies abound, we’ve kind of taken another route, and our hound of choice is a Yorkshire terrier. Not the most macho of dogs, but pound for pound every bit as tough as any other breed. That, at least, is my story, and I’m sticking to it. The roads on our development only link the houses, and on both sides of the fairly small urbanisation they deteriorate into rough stone tracks that wind and meander their way through the high pine forest. And on these tracks, it’s not unusual to encounter other animals, both wild and domesticated, ranging from the occasional snake up to wild boar, and occasionally cows and goats. Usually, the presence of domesticated animals is signalled by the ringing of bells. Not by some attendant or herdsman, but simply bells which are secured around the necks of some of the animals.
The terrier – whose name, not that it matters, is Ted – takes a somewhat jaundiced view of anyone and anything she sees on what she clearly believes to be ‘her’ land, and looks upon cyclists and joggers with particular disfavour. But she’s not usually too bad with goats and so, when I heard the melodic tinkling of bells around the corner on the track in front of me, I decided to press on, to pass through the herd and continue along the route I had planned.
When I got around the corner, the terrier and I were confronted by about a dozen goats ranging from quite young kids up to full-grown adults, all of whom were busily eating just about everything in sight in the manner of goats everywhere. The animals were what I had expected, but the goatherd certainly wasn’t.
We exchanged friendly greetings in the way that one does in Andorra, and the terrier and I weaved our way around the animals and continued on. At the corner, I paused and looked back. The expression ‘goatherd’ conjures up an image of a scruffy and unwashed individual, probably leaning on a staff, and raises unspoken questions about where he sleeps and how and where, exactly, he attends to certain other bodily functions.
But this goatherd was wearing a pair of stout brown shoes, neatly pressed tan slacks and what looked suspiciously like a Pierre Cardin shirt. On his wrist was a solid gold Rolex Oyster watch and he was smoking a large cigar. Not what you might call typical.
And it wasn’t as if he was just standing in for the regular goatherd: I’ve seen him before and to the best of my knowledge these are his animals.
That’s one of the oddities about Andorra. If you go back a mere half century or thereabouts, the population had essentially a subsistence economy, farming cattle, goats and tobacco, and living in stone houses where the lower floor functioned as a barn in the winter. And then a number of foreigners, principally English but some other nationalities as well, discovered that the Andorran government, such as it was, had no idea what the words ‘income tax’ actually meant, and promptly began buying up whatever land they could lay their hands on.
As a result, Andorran families suddenly found a huge demand for building land from foreign investors, and land itself became so valuable that it was sold, not by the acre or even by the square metre, but by the pam, or the palm of the hand. Twenty-five pams make up one square metre, as a matter of interest. There was a sudden and pronounced influx of wealth, and farmers who until then had barely been able to scratch a living from the land suddenly found that they were able to buy new houses and drive Mercedes and BMWs and generally live the life of Riley. But the only profession that they knew was farming, and so despite their swelling bank accounts, they continued to grow tobacco and herd cattle and goats just as their fathers and grandfathers had done before them.
Hence our local goatherd. And personally, I think it’s rather sweet.
And there was one other interesting fact that I’ve just remembered, from the very early days when we first had a property in the country. I can recall seeing the local postman walking, and sometimes jogging, down the road followed – for reasons which I was never able to ascertain – by his wife driving a car. A little eccentric, perhaps, but there you go.
But that wasn’t the interesting fact. I learned later that this man, this postman, with responsibility for one of the most populous valleys in the country, could neither read nor write. Both, one might reasonably think, would be fairly important skills to possess if your job involved delivering mail. Apparently, he had obtained the job through his family connections – in Andorra it’s often who you know which is most important – and his technique for delivering letters was simply to compare the writing on the envelope with the writing on the outside of the building, and if they more or less matched, he would then stick the letter in the communal mailbox and walk away.
And I suppose the really odd thing is that the letters were usually delivered to the correct building.

You can contact me at:
www.James-Becker.com
Posted by curzon group at 01:27 No comments: