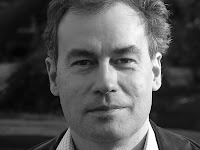 Shucks, there's another award I didn't win. Jonathan Littell has collected the bad sex award handed out by the Literary Review. I really don't know how they can have ignored my efforts in 'Death Force'. "Orlena's body felt supple and warm next to him in the bed. Steve was cradling her in his arms, aware of the way their sweat was mingling. Her hair was lying across his chest, and he could feel his breath on his skin, and her nipples squeezed up next to him." I would have thought that stood a chance. Then again, when I read some of Littell's efforts, I suppose I have to concede defeat. "This sex was watching at me, spying on me, like a Gorgon's head," he writes. Cripes. That really is terrible.

For any writer, however, there is an interesting issue here. How do you write well about sex? I've always taken it as a given that a great thriller needs a great sex scene (unless it a police procedural, of course, in which case the hero will be a miserable Scottish bloke with a drink problem who no one would fancy). It is part of the mix of popular escapist fiction, which is what thrillers are all about.

But, of course, it is extraordinarily difficult to write well about sex. Elvis Costello, who's a big hero of mine, once remarked, in the course of taking his usual pot shots at the critics, that "writing about music was like dancing about architecture - it's a really stupid thing to want to do." And as usual the great man is onto something. Sex just doesn't lend itself to description. You either slip into soft porn cliches, in which case you end up coming across like 1970s edition of Penthouse. Or else you start getting ambitious, in which case you end up sounding absurd very quickly.

The key, I think is to keep it brief, and to make it integral to the story. But I'll return another day with the tips for a perfect sex scene. In the meantime, I'm still chuckling over Littell's efforts.
Posted by curzon group at 04:30